I hope you all had a great holiday. This is the first Ramsbury Football Club Newsletter.

Please feel free to distribute to parents and guardians. Any suggestions for the second edition would be most welcome and can be sent via the Ramsbury web site.

This is a great community project and the money form Waitrose Marlborough will be used to buy sports rollers as part of the Club’s Sports Therapy drive in partnership with Frankie Naylor Sports Therapy to improve fitness and injury prevention in youth teams and young players. 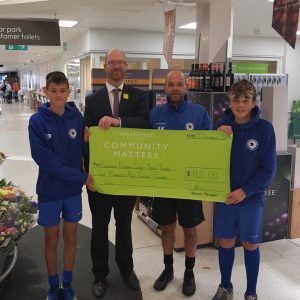 Today Frankie Naylor of Frankie Naylor Sports Therapy took the Ramsbury U15s Squad for a session on warming up and warming down pre and post training. It was hugely useful and informative and the U15 squad and coaches learned loads….and the players were clearly more flexible than the coaches! 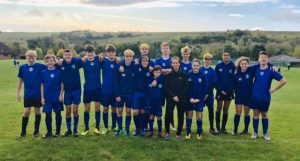 Frankie’s son plays in the U6 squad and as such she is free between 0930-1030 for short sessions to ensure coaches and players alike understand and apply the right type of warm ups and warm downs, how to stretch properly and also the benefits of using rollers. 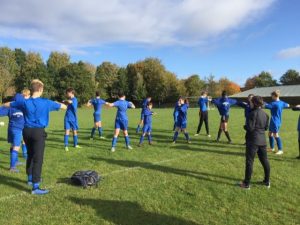 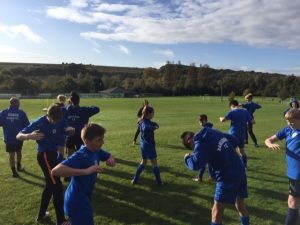 A huge thank you to Frankie and if any other team needs her help then please contact me.

Ramsbury Football Club is delighted to announce that Frankie Naylor has volunteered to help coaches and players between 0915 – 1045 on Saturday mornings when she is at the Recreation Ground. She will be up watching her son playing with the U6s on the top pitch should you need her and is very willing to give advice and assistance as needed.

We are really grateful to Frankie for volunteering her time and expertise and she is a brilliant addition to Ramsbury Football Club.

This U14 Division 2 clash kicked off under a brilliant sunny sky which mirrored the confident disposition of the U14 team fresh from their away win at Chippenham last week. This week’s visitors, AFC Newbury Whites were also going to be formidable opponents and Ramsbury knew that they would have to start strongly.

The first goal (pictured) went to Ramsbury and helped steady the ship and let the team settle into their well drilled passing routines. Ramsbury became more and more assured on the ball as the first half progressed and another goal soon followed the first one to make it 2-0.

Newbury did have their chances and the Ramsbury defence had to be on their guard throughout to ensure that the score stayed in Ramsbury’s favour. However, apart from a late consolation goal towards the end of the second half the result never seemed to be in doubt for a strong Ramsbury U14s side who are enjoying playing with a flowing style that, if it continues, other teams will find hard to break down. The game ended 4-1 to Ramsbury and they look forward to the visit of Bradford Town in the cup next week. 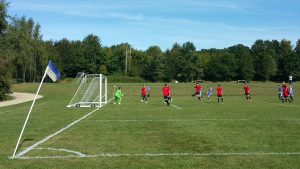 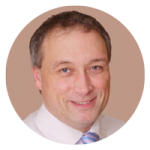 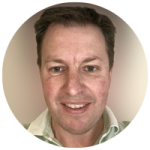 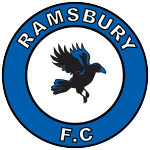