It was an end of an era as the Ramsbury FC U17s ended 10 years of youth football with a friendly match against Ramsbury FC seniors on Fathers Day.

There was a pre-match presentation to the 4 players who have been in the team throughout the 10 years have played for one club only: Noah Greenway, Seb Symon, Euan Mulholland and Freddie Knowles who have played together since U8s – a huge achievement!!!

Following a final team photo the friendly match saw an entertaining game conclude 4-2 with some superb goals that included a first class penalty by George and a superb free kick by Zac that rattled the cross bar! There was a decent crowd and the football played was very even as both sides included senior and U17 players and in the first half included Seb, Zac and Jon Symon all playing on the same side….2 of the 3 Symon boys were much better that the out of date one!!!!!!!

The team awards were presented at the end of the match with Evan winning most improved, Tom winning Supporters and Players Player and Noah winning Managers Player of the year! Well done to all.

A BBQ and a few drinks followed with some speeches and gifts; and Freddie won a special award from Geoff that I am sure he will treasure for ever!

This is an end of an era and the U17s are the first Ramsbury FC U17s team in over 10 years to stay the course, finish the season and have players who have been all the way through from junior football through to the seniors. A lot of credit for this must go to Andy and Geoff as the coaches, but importantly to the players themselves and also to all the parents and guardians and grand parents for their commitment to Ramsbury FC and for supporting the players to play football as it should be played and in the right spirit and in the right way. 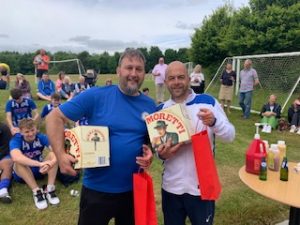 It is a real shame the team will fold, but on a positive note many of the players will continue their football and may join the senior squad and/or will hopefully want to help coach the juniors sides or return after college and university to continue to be part of Ramsbury FC. Sean, the senior coach, gave a generous offer to join the senior squad and stated that he was impressed by many of the the U17s and that they had the ability to make the transition. Great stuff!

Finally, it was a great day, a great game of football and a lot of great people to come and support and be involved. All the very best to you all and thank you so much for all the help with the BBQ and cleaning up as it was much appreciated. 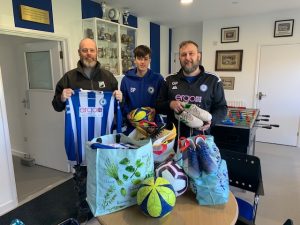 Ramsbury FC U17s Coach Geoff Pratt, pictured with his son Ben who plays in the U17s squad and Ant Atkinson from the Wiltshire Wildlife Trust, and a parent in the U16s team, responded to a request for donations of football kit to support children who have been re-located to the UK due to the war in Ukraine.

The response was instant and good quality football boots, Ramsbury FC strips and a number of training balls were quickly handed to Ant Atkinson of the Wiltshire Wildlife Trust in support of this worthy cause.

It is planned to do more in the near future and hopefully provide more kit and support to those children that need it.

Ramsbury FC has previously supported ATE, a local registered charity that supports communities living in a remote area of Ghana in Africa, by  donating strips and boots and will look to continue to support similar charities that provide much-needed support to families and children in difficult circumstances. You can learn more about Action Through Enterprise (ATE) here: ATE’s Story | ATE Ghana

The Ukraine appeal remains paramount and more information can be accessed via this link:

Formed in 1887, Ramsbury Football Club has been an integral part of our community and a club that has been enjoyed by generations of families involved with grass roots football.

To mark 135 years of football in our community Ramsbury FC plan to hold a Festival of Football to celebrate. The club, along with our club sponsor Ergo+ FM, will continue to support our youth and senior players in continuing to play the beautiful game as it should be played: fairly and competitively and with passion and pride!

The club will also use the following Ramsbury FC logo for 2022 and into the next 22/23 season.

All at Ramsbury FC are extremely proud of our small grass roots football club, the rich history it has and the amazing volunteers, players, families and supporters that make us who we are, remember what we have been and look forward to providing football in our community for years to come. 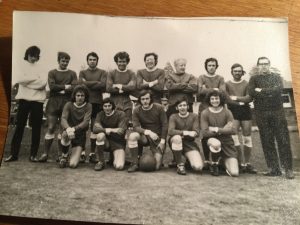 After a comfortable win against FC Bath U17s last week at home, Ramsbury FC U17s suffered a tough away loss to FC Batch to ensure honours were even between the two teams with one win apiece.

Ramsbury FC U17s travelled with a depleted team as a number of players were unable to play due to catching COVID and this included the first choice keeper. 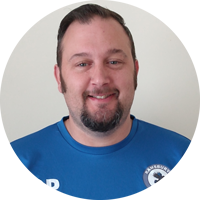