Ramsbury FC secured a hard earned point against a well organised and physical Spectrum FC team who like Ramsbury had one win and one loss to their name before this fixture. Ramsbury FC were also without a number of established players and were without Coach Sean who cashing in his Saga coupons was relaxing on the Italian Riviera with the family. This meant that Chris stepped up as the Player/Coach/Captain/Treasurer/Team Sheet submitter/Physio and kit issuer….and did the best he could considering the woeful handover from Sean….no team sheet Sean…and selfishly taking Adam with him (Shirt of Shame on your return fella!). What wasn’t woeful was the performances from those playing for the first time this season: Harry at right back, Arun (Neymar) right wing and Lee (Cricket type not Welsh type) at left back, Macca and Ash up front. Geoff in goal was awesome as he limped throughout with an injury from training the Under15s that morning (legend Geoff!). All the team were excellent although Ash may have over done the camera work last week as his hamstring went faster than a Nikon camera shutter and he had to be replaced by Macca up front early in the first half. Hopefully a quick recovery Ash!

The first half was pretty even with Zac testing the Spectrum keeper with a 25 yard shot early on and Darvs going close also. Geoff made two top draw saves as both sides pressed well. But Spectrum scored a 30 yard worldy to go 1-0 up and upped their game. However, Ramsbury soaked up the pressure and caught the opposition napping on the counter and Zac’s pass was pin point to Darvs who guided it neatly into the goal to make it 1-1 with a really brilliant team goal. Spectrum shortly after scored from a corner that was not dealt with well enough and a lucky shot ricocheted off Tom’s chest and past Geoff to make it 2-1. Ramsbury dug in and a rash foul outside the area on Zac allowed Tom to curl in a great free kick to make it 2-2 and that’s how it stayed until half time.

The second half saw Spectrum use their subs in the searing heat and their fresh legs gave them the momentum. But Ramsbury stuck to the game plan, kept their shape and defended heroically to wear down the opposition. Ramsbury’s fitness gave them the edge as they countered again and again through Darvs, Zac and Neymar up to Macca. Leigh and Tom were solid in midfield and Harry and Lee pushed higher up the pitch as wing backs pegging back the opposition. It worked really well as Spectrum were on the back foot and Macca took full advantage scoring a fine goal after successive crosses from Neymar and Zac to make it 3-2 with 6 minutes to go.
Ramsbury were in control but went looking for the killer goal and did not consolidate in midfield. Spectrum gambled and threw everyone forward and a long punt up field caught out Dan who made a rare mistake and let the opposition centre forward to score. However, he missed (not sure how) as Harry and Chris closed him down and Geoff came out to narrow the angle, but it was shit miss nonetheless and a real let off – not for Dan O though as he earned the SofS this week. 2 minutes later and another hopeful punt saw the Spectrum no10 get a lucky touch and pop between Dan and Chris and prod the ball past Geoff to make it 3-3 with a minute to go. It was rough justice as Dan and Chris had been brilliant against the opposition forward line and were genuinely unlucky. The game ended 3-3 and although disappointingly a draw (for both sides) there can be no doubting the commitment or the effort of both teams to earn a hugely well fought out point in the baking sun. Well done to all who played as Ramsbury were without doubt the better team! 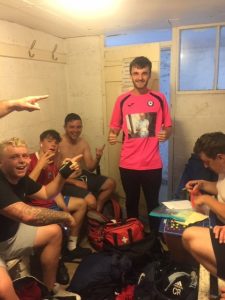 Let Sean know soonest if you CAN or CAN’T make training (Tue 6.30-8pm) and the match next at HOME @Ramsbury with 2.30PM kick off.