Ramsbury FC score 5 in away win against Cricklade Town FC

Another impressive win for Ramsbury FC as they comprehensively defeated Cricklade Town FC 5-0 in the Swindon & District League Division 2. The win sees them 6th in the table.

Although only 1-0 at half time, Ramsbury FC turned on the style in the second half and scored another 4 without reply. It was an expected feisty game against Cricklade that saw player/coach Sean get a yellow for not having the same view as the referee and suggesting that (the ref) need appointment with Specsavers; in getting the yellow card he duly awarded himself the shirt of shame! 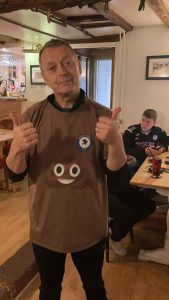 Rob was man of the match with a well deserved hat trick (his words not mine….via Seano…of course!) with the other two goals scored by  Skips and Sean Red Boots. It was an excellent result for Ramsbury FC who are getting better and better each week and give every team they play a tough game.

Next game is at home against Moredon FC First with a kick off @ 2.30 and a very winnable game if Ramsbury can field a strong team.