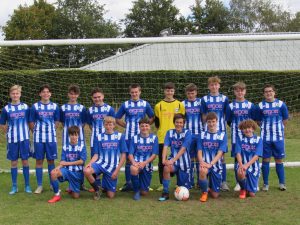 This was another convincing win against a well organised Bradford FC U16s side who up until the loss today were top of the league. Ramsbury started brightly but struggled for the first 15 minutes to find any rhythm and were slow to win the ball and not quick or accurate enough with their passing. However, they were without doubt the stronger and fitter team and Fred on the right made some great runs  and some great crosses that saw Ben P go so close to scoring. And it was the same combination after a great ball by Kieran on the right that saw Fred nutmeg the left back and put in a superb ball to Ben P at the back post to open the scoring with a well timed volley and make it 1-0.

Ramsbury were still a little sluggish but were committed with some excellent tackles by Joe and Byron as the CDM pairing and their break up play released George to pass to Fred and set up Ben P with a well timed shot to make it 2-0. The second goal seemed to liven Ramsbury up and especially Reece on the left who was turning the Bradford defence inside out and he combined really well with Hayden at left back to recycle the ball to Liam and his sublime cross field ball to Fred saw him cross back again to Euan to score a fantastic team goal and make it 3-0. Euan had not been on long for Byron and it is great that the squad has real depth and quality in the squad. Josh at the back and Noah in goal did well to keep their concentration as Bradford managed to get a rare opportunity in on goal but to only manage a weak shot that Noah easily saved. A great punt by Noah caused panic in the Bradford defence and a lovely flick on by Fred saw Ben P calmly slot the ball calmly into the net to make it 4-0 and see Ben P get a deserved hat trick. Ramsbury were relentless in their attack with Liam, Euan and George all going close and a succession of corners should have seen another goal. But Fred was not to be denied a goal and more excellent work by Joe and Euan and George and Liam in midfield caused more panic in the opposition defence and a deliberate hand ball led to a penalty which Fred duly converted to make it 5-0.

With the opposition heads dropping Jon deputising for Geoff who was away for the day made a raft of changes and brought on Maya into midfield, Seb at left back, Barney for Fred on the right and AJ for Reece on the left and Byron back on for Joe in the CDM role to play out the last 10 minutes. Even with so many changes Ramsbury looked good in possession and Noah and our back 3 were rarely troubled and continued to dominate the game. The second half saw the same team that finished the first half other than Ben P in goal for Noah who went on to the left wing and AJ move to centre forward. The effect was startling as Noah attacking on the left linked so well with Liam and George and AJ up front and decimated the Bradford defence with Noah scoring 2 superb goals in the first 5 minutes with his power and pace too much for the Bradford defence.

At 7-0 Ramsbury were coasting and played some great football with quick accurate passing. Maya was at the centre of most things and her touch and short passing game superb! Liam and George were everywhere in the midfield and made it look like Ramsbury were playing with extra players; and after a succession of corners a stunning corner by Byron found Liam who expertly smashed it into the goal with an unstoppable volley. It was fantastic technique and rightly earned him moment of the match and made the score 8-0. It was then very quickly 9-0 as Barney on the right (a late replacement for Jez) skipped around 2 Bradford defenders and made a wonderful cross that was inches from being converted by George. But the ninth goal did finally come with Noah getting his hat trick after a great clearance by Joe to George who flicked onto Noah and his pace and shot was too much for the Bradford keeper and made the score 9-0. It was nearly 10-0 as both George and AJ rattled the cross bar with long range spectacular shots, but it was Fred back on for Barney who took no time to make it 10-0 with both George and Euan going close with blocked shots and Fred was there in the right place at the right time to slot the ball into the net.

More substitutions were made but it made no difference as Liam set up Noah to score his fourth goal and make it 11-0 and very soon the referee thankfully blew the whistle as the opposition had totally given up. Although the game was stopped a bit early, as per last week, it was the right thing to do as the aim is not to humiliate the opposition but to defeat them and that had already been achieved and the team talk discussed this at the end of the game. Player of the match was also discussed and unanimously awarded to George for his end to end play, tackling and midfield dominance – his display was outstanding! Well done.

In sum, another confident and committed performance by the whole team and with strong individual performances by all players. The team continue to improve and have shown that they are definitely a team who will battle and compete against any team. They will need to do this as the next game is a friendly match against Royal Wootton Bassett U16s at home next Sunday and this will be a much harder test for the squad.

Training midweek on Wed 6.30-7.30 for fitness and close game skills and then Sat 1000-1130 for pre-match skills and tactics sessions. Please respond on SPOND and thanks as always for your support. 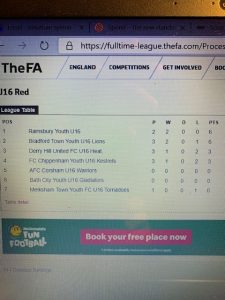