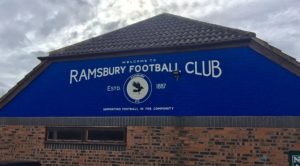 A great friendly match tonight away to Ardington FC U16s who play in the South Oxford Mail League and who were a well organised and physical side. Although a 4-2 loss it did not fully reflect the match and there were more positives than negatives to take away as Geoff and Andy pointed out to the team.

The first half was dominated by Ramsbury who were quicker to the ball and a constant threat with Fred upfront and Reece and Noah playing wide right and wide left with Jez and Euan in the middle providing good support. It was a great cross by Noah to set up a simple tap in for Fred that gave Ramsbury a deserved 1-0 lead. However, this seemed to spark the opposition into life and they increased the tempo and put more pressure on Joe and Byron in their usual CDM roles and needed some brave defending from Hayden, Josh, who was Captain for the match, and Kieran playing out of his usual position as the right of he back three. This unsettled Ramsbury who lost their shape and discipline and struggled to compete at times and which led to the opposition scoring with a headed goal from a corner to make it 1-1. The game was a little to frantic with neither side settling and controlling the ball although both sides went very close to scoring a second. It remained 1-1 at half time with Ben P in goal making some very smart saves; with Josh and Kieran excellent at the back and Byron and Joe really solid as CDMs and Reece excellent on the right with great movement and passing. A really good half.

The second half saw Ben P replaced by Noah and Seb on for Hayden and AJ playing up front for Fred. The tempo increased again and the opposition were in control for sustained spells with some great battles between Kieran against the left wing and Seb against the right wing who had electric pace. However, a speculative cross caught Noah unawares and he could only parry the floated ball into the back of the net to make it 2-1. The opposition seized the momentum and played a number of high balls behind the defence for their wingers to run onto and which caused Josh and the defence problems and made it difficult to clear our lines. Owen came on and settled in really well and provided some good cover in defence and Liam came on and provided much needed physicality up front and was like a whirlwind and was so unlucky not to score to restore the balance with Euan and Fred both having chances saved by the excellent Ardington keeper who was well over 6ft tall! But it was Ardington who scored next with another great ball that split Seb and Josh in defence and the right winger used his pace to race through and make it 3-1. What was good to see was no negativity and to the contrary Ramsbury started to play football with Joe playing much deeper and mopping up the loose balls and Byron, Euan, AJ and Jez battling much better in the midfield. AJ’s running was electric on the left but his touch let him down when he got behind the opposition defence and excellent work by Reece saw Liam going close yet again with a goal line clearance. Moments later Liam rounded the keeper to only be fouled and earn a penalty. He duly scored and the game was brilliantly poised at 3-2 with 5 minutes left to play. The game looked likely to see a draw when some good play by Ardington resulted in a quick break on the left and although Ramsbury defended well the ball was sharply turned back towards goal and struck Hayden’s leg to ricochet into the net! It was a real blow as the Ramsbury fight back was in full flight and the goal served to settle a thoroughly entertaining match and see the match end 4-2 to the opposition.

Training on Saturday 1000-1130 and please reply on SPOND and another friendly at HOME this time against Grove Challengers U16s from the South Oxford Mail League on Sun 6 Sep with a 1100 kick off.

Well done to all and also all parents and supporters as always.