Ramsbury U15s won an epic Wilts Cup match against Div 2 opponents Royal Wooton Basset U15s (Blue) with a fully deserved 5-4 win. It was a superb performance by all 16 players involved and a game that saw Noah getting moment of the match for his outstanding 30 yard shot into the top corner from a really difficult angle and which was the best of his sublime hat trick. Ben P wasn’t far behind Noah with a brilliant brace of goals (albeit one that hit a RWB defender and trickled in!) to knock RWB out of the Cup. But player of the match went to the youngest player on the team John Turner, who came on as superb sub and alongside Euan as Captain in the centre of midfield demonstrated real commitment and tenacity with an awesome terrier like performance that made all the difference – well done John!

The first half was very physical with RWB the stronger and more aggressive team and it paid off as they went 1-0 up after 20 minutes. The coaches shuffled a couple of players around and it seemed to work as the midfield three of Euan, John and Kieran protected our back line far better to give Josh and Maya more space to clear the ball and provide support to Seb and Ben B as wing backs – it was great to see and Ben B and Seb along with Josh and Maya made a number of superb tackles and linked really well with Fred wide right and Noah wide left. This led to the Ramsbury equaliser as Ben B cleared to Fred who crossed a superb ball over that the RWB keeper could only parry and there was Noah to sweep it in to make it 1-1. After that it was much more even and Ramsbury went close on a number of occasions with Ben P getting the better of the two RWB centre backs. Tom was so solid in goal and RWB were restricted to long range shots that did not trouble him and instead gave the team huge confidence. RWB were in disarray and lost the plot as their Captain was rightly sin binned for abusive language by the excellent young referee. Scott and Alex came on and gave Kieran and Fred a well-earned break and Hayden came on for Seb and slotted in really well and showed reall strength at left back. But a lack of communication and failing to clear the ball resulted in a soft goal for RWB and they ended the half 2-1 up against the run of play.

The second half was much, much better with Ramsbury competing for every ball. Euan and John were immense in the centre of midfield and alongside Scott on the right manage to get the ball up to Noah, Fred and Ben P to cause panic in the RWB defence. Everyone was much more up for the game and some quick thinking by Euan taking a quick drop ball passed quickly to Ben P who ran into the 18 yard box and slotted past the RWB keeper to make it 2-2. It was then all Ramsbury with Noah scoring a 30 yard wonder goal from the narrowest of angles to make it 3-2 and then constant pressure resulted in a corner that was brilliantly taken by Ben P as it curled in and hit a RWB player and then trickled in past the RWB keeper to make it 4-2….(they all count and I will give that one to you Ben P!)

Maya came off for Alex for a deserved rest and Barney on for Fred as Ramsbury pushed for another goal. But it was RWB who scored next to make it 4-3 with only 8 minutes to go as they pounced on a parried save by Tom to slot into the net. RWB upped the tempo and pushed forward in numbers to get the equaliser. Josh, Ben B, Alex and Hayden had other ideas and were like a wall in defence and although John and Euan came off completely drained we had Byron and Kieran to slot into midfield and keep the momentum going alongside Scott who also had run himself to a near stand still. But a great ball out of defence by Alex that was clipped forward by Byron to Ben P and onto Noah saw him calmly slotted in his third goal and claim his hat trick to make it 5-3. It was brilliant football and the move that certainly had the match won with minutes to go! But RWB kept going and got a bit of luck as the ball pinged around the defence and popped in front of their centre forward to slot in past Tom to make it 5-4. It was too little too late for RWB as the ref blew for time and to record a great win for Ramsbury. Great stuff.

What is important, however, is not the win (although great!) but the manner of the performance that matters. It was a team win and everyone contributed and were counted on – it is what the coaches expect and was great to see. All players were superb. well done.

Next week I am away again with work, but hopefully Geoff and Andy will manage the friendly game v Pewsey FC U15s – they are a great bunch and it is a great opportunity for all players to get game time and play in different positions. More to follow on SPOND. It will be a 1100 kick off and all to be at the ground at 1030. There is NO match next Sunday.

Jose Sol took some photos of today’s game and you can access via the link below or via SPOND (Thanks Jose) and a huge thank you to Nana Sol for working so hard in the Clubhouse Café (and of course Alex on Saturday!) with Nicola – your help is so appreciated! And well done to all the supporters and their hard liquor drinking – much needed for an epic cup match on a cold day! 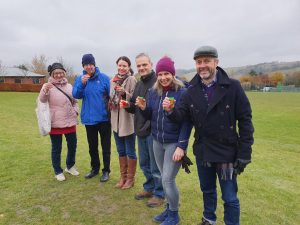