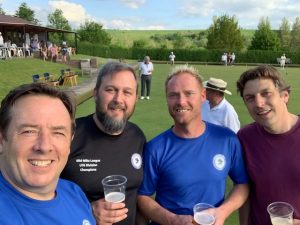 Ramsbury FC Coaches have a great night out at the Ramsbury and Aldbourne Invitation Bowls Night on Friday 4th June.

An invitation to compete in a fun Bowls Evening by the Ramsbury and Aldbourne Bowls Club Chair Bob Osmond saw Ramsbury FC enter a strong team.

Geoff Pratt and Si (Barty) Bartholomew were the stars of the team and looked like naturals with Barty coming 2nd overall and Geoff consistently in the top ten! Chris Roberts also put in some solid scores and Jon Symon tried hard, but showed better form at downing the Thatcher’s Cider on offer. Bowls is without doubt not his forte!

The team came a credible 4th behind the Fire Service, Golf Club and Tennis Club, with the only consolation being the overall winner Pete Wheeler is another Ramsbury FC Coach and ex-senior player…..but unfortunately for us was throwing woods for the Fire Service as he is also a retained Firefighter in the village!

Well done to Pete and Barty, but also to Martin and Bob and all at the Ramsbury and Aldbourne Bowls Club who organised  a great night of entertainment and looked after us with great advice, patience and copious amounts of beer, cider and bacon butties!

I will definitely be up for another invitation night when it comes around again……as I really was poor and need the practice! Great community fun and an interesting game to play.